Roxana Crisólogo is a Peruvian Finnish poet and art worker living in Helsinki, she has published many poetry books. Roxana is the founder of Sivuvalo a multilingual literature project. Currently she works as coordinator in Finland for Nordic Literatures in Change and Exchange, a literature project engaged in creating networks for immigrant language writers in the Nordic region. More information: https://roxanacrisologo.org

Shashank Mane is an Indian born writer who has lived around the world. Belonging has played a central theme in his life since childhood. He has lived in Finland since 2013 and is a recent graduate of the University of Jyväskylä.

Josephine Moate has lived in Finland for almost half of her life. She lives with her two teenagers and Finglish husband, enjoys working in the field of education, is amazed by the way in which time seems to stand still and fly by at the same time, likes playing the piano and hopes to one day be able to play a Debussy piece and suspects that writing letters more often would do her a lot of good.

Dmitri Leontjev writes as his job and to speak from his heart, sometimes both. Trying to do it well.

Deniz Duman was born in Ankara, Turkey in 1992. In 2016, after receiving degrees in Psychology and Communication and Design, she moved to Finland for further education. Currently she is conducting her doctoral research in music psychology at the University of Jyväskylä. Her interests include well-being, psychology, music, cinema, literature and travelling.

Roxana Sadvokassova (b. 1992) in Oskemen, Kazakhstan, moved to Finland to pursue masters in intercultural communication. She currently lives in Helsinki and works on her short film, and studies filmmaking in the Academy of Moving People and Images.

Mike Baynham is a poet and translator based in West Yorkshire, UK. He translates from Spanish, French and Arabic. He also sometimes writes poems in Spanish, French, Arabic and other languages. But not so far in Finnish!

Luciana Mariano was born in São Paulo, Brazil, in 1971, during the Brazilian military dictatorship. Politics and arts have always had a strong presence and importance in her life. Even if she is a naive artist, her art is not always as cute and simple as is common for primitive artists. Her paintings always carry extra layers of questioning and criticism of her narratives. For the past ten years, her paintings have been shown in galleries and museums, but her writings are still hidden and waiting to bloom.

Ufuk Özden is abysmally normal and he would like his work to speak for itself, hoping that the work in question is less average than the artist himself.

Panu Artemjeff is a singer, a songwriter, and a folk musician who gets inspiration from literature and films. Panu is playing in a band Is This really Me. In his solo performances, Panu describes philosophical, aesthetic, and esoteric influences behind his songs. 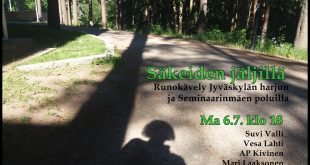 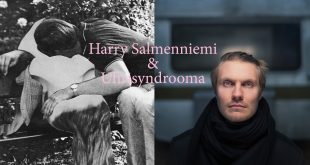 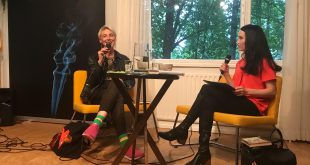